Captain Michael Bianco has been with the Riverside County Sheriff’s Department for twenty years. Captain Bianco’s first assignment was in 2002 when he was assigned to the Court’s Division- Larson Justice Center in Indio. In January 2004, he transferred to the Patrol Division-Indio Station and worked in the cities of La Quinta, Coachella and the unincorporated county areas. In 2007 Captain Bianco was promoted to Corporal and transferred back to court services.

In February 2019, Captain Bianco promoted to the rank of Lieutenant and held assignments in the Sheriff’s Emergency Response Team, Patrol, and the Special Investigations Bureau. Captain Bianco was promoted to his current rank in December 2021 and began commanding the Thermal Sheriff’s Station. He is pursuing a bachelor’s degree in Criminal Justice and has lived with his family in the Coachella Valley since 2002. 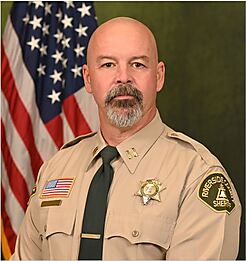